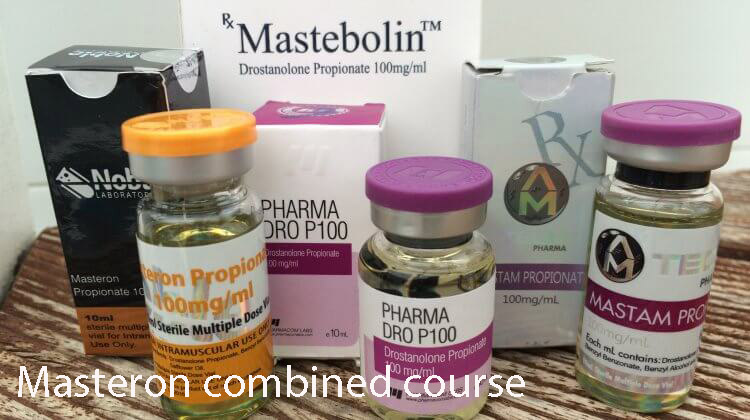 Masteron is an anabolic steroid whose active ingredient is Drostanolone Propionate. It has high androgenic activity (up to 130%) and moderate anabolic activity (up to 40%). It is produced in the form of injections and is quickly absorbed into the blood, so the effect of the drug is felt within days after the first injection.

It is highly sought after among representatives of strength disciplines, such as weightlifting and bodybuilding, as an effective means of increasing strength, maintaining mass and eliminating subcutaneous fat. In addition, the anabolic is an aromatase inhibitor, it does not convert to estrogen and reduces the level of dangerous globulin. In sports circles, it has established itself as a “soft” drug that has many advantages and does not cause side effects in moderate doses.

Read more about anabolics with Masteron

The negative aspects of the individual use of the drug are easily eliminated by the joint use of the steroid with other similar drugs. In its action, Masteron is most similar to androgen receptors.

With him, Winstrol or Oxandrolone is most often used. The first shows the maximum efficiency, since its interaction with androgen receptors is minimal. It reduces the concentration of globulin that binds to sex hormones, that is, it exhibits a synergistic effect.

To gain muscle mass, Masteron is combined with testosterone propionate. In such a combined course, it is recommended to use gonadotropin. This compensates for the endogenous testosterone level. The best compatibility of Drostanolone is manifested with such drugs as Trenbolone and Boldenone.

Also, this steroid is in high demand in powerlifting and powerlifting due to its ability to rapidly increase strength without increasing body weight, allowing the athlete to stay within their weight class.

It has a half-life of 2-3 days, so it is quickly excreted from the body. Due to the short duration of the drug, its frequent use is necessary. Athletes often enter Masteron every other day or three times a week.

Reviews of the Masteron course by athletes who already have significant experience in taking steroids indicate that for the best effect, the duration of the course should be 6-10 weeks with an average dose of 300-500 mg per week, c ie 100 mg of the drug every other day or three times a week. Exceeding these doses threatens the presence of side effects, however, the use of the drug in lower doses than indicated may not bring the desired result and negatively affect the overall effectiveness of the course.

This course lasts 6 weeks and is suitable for an intermediate level athlete. In the Masteron Solo course, the recommended dose is 100 mg of the drug every other day, or 300 mg per week. Injection days are Monday, Wednesday and Friday. According to the generally accepted opinion, it is precisely the frequency of administration and the dosage of the substance that are optimal for achieving the desired effect, and side effects will not make themselves felt.

To note! The drug belongs to fast esters, athletes use it an hour before strength training. The peak of this AS is thought to occur shortly after injection.

For intramuscular injections, it is recommended to use 2 and 5 ml syringes, with a standard needle (no insulin). The introduction of such anabolic steroids is carried out strictly intramuscularly and preferably in the gluteal muscle. As the injections must be made quite frequently, it is recommended to change the injection site each time to avoid the formation of lumps. The drug can be stored in a dark, closed place at room temperature, it makes no sense to store it in the refrigerator.

An equally important point is PCT (post cycle therapy), the value of which is to minimize the negative properties of steroids and restore your own testosterone production after the course. One of the most effective drugs for PCT is tamoxifen. The recommended dose is 1 tablet per day for 15 days. The drug should be started 1 week after the last injection of Masteron. The use of tamoxifen will allow you to quickly adjust the functioning of the organism and restore the disturbed hormonal balance after taking AS.